Look, Beyoncé Giselle Knowles-Carter is one of the most successful, glittering, bona-fide superstars on the planet. If she says she only wants to drink alkaline water, served at 21 degrees centigrade and sipped through a titanium straw, who are we to argue? 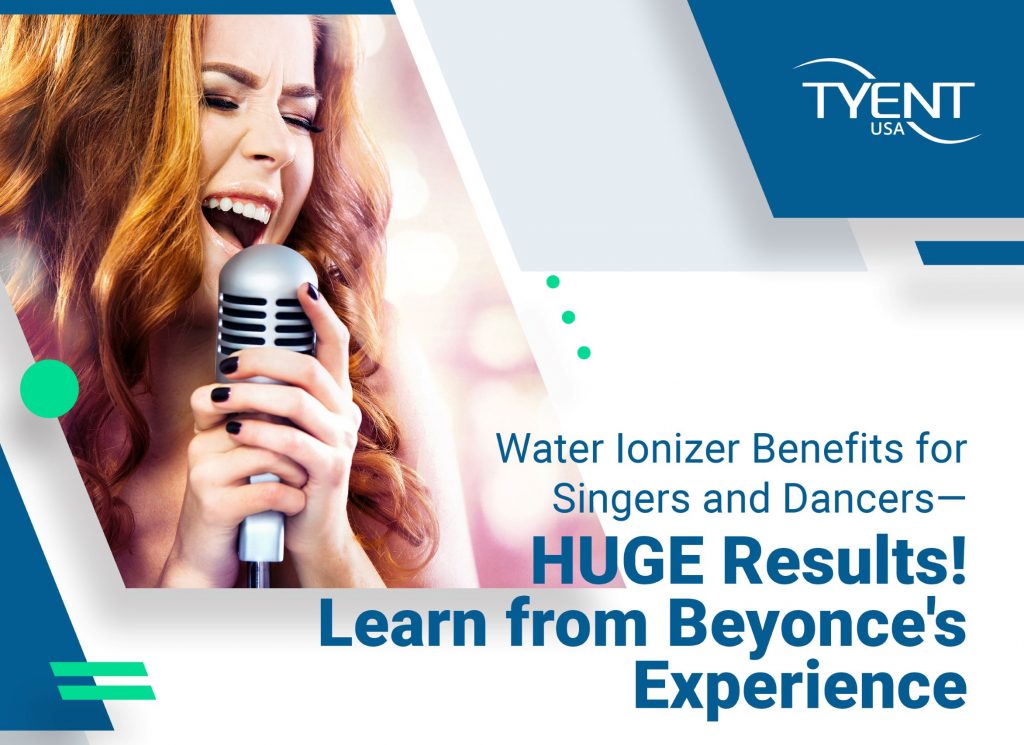 Can Alkaline Water Help to Speed Recovery After Performing?

It sure does. Alkaline water from a water ionizer hydrates you faster and for longer than tap or bottled regular water. …

Can you believe that the 200th episode of Murdoch Mysteries has just aired? With fans of the award-winning show enjoying Season 13, it seems like a good time to catch up with its star, Yannick Bisson!

One of Canada’s best-loved film and television actors, Yannick is also a family man, keen skier, cyclist and sports enthusiast. So where does he get all that energy from?

Okay, we’ll let you in on a secret: Yannick Bisson is a long-time fan of Tyent Water Ionizers! Yep, drinking alkaline hydrogen water is key to how Yannick stays right on top of his professional game.

A bold statement to make – but hear us out:

Beckham’s general disdain for drinking water finally caught up to him last year.

Read on to find out how:

The USA Hockey Warrior Classic, an event dedicated to injured and disabled Veterans of the Armed Forces, thrilled audiences in Las Vegas over three days from Oct. 4-7. Now in its third year, the event invites ice hockey teams from across the country to participate and compete.

Audiences didn’t only get to watch some awesome sportsmanship and support a good cause, but they were also lucky enough to see presenting sponsor Terry Fator in action!

The Voice of Entertainment

Best known for being a popular entertainer and former America’s Got Talent breakout star, Fator has since enjoyed a 5-year, $100 million deal while headlining in Las Vegas.

It’s great to see that “The Voice of Entertainment” himself …

Who remembers that iconic line from the opening sequence of the popular ‘80s show “Fame”?

Every week, tough-but-big-hearted dance teacher Miss Grant yelled at her students that “fame costs…and right here is where you start paying. In sweat.”

Sweating is Cool Because Science Says So!

When we exercise or do anything on a hot day, we sweat. We need to sweat because it’s good for us.

Here’s how the science of sweating works:

Why is alkaline water from our award-winning Tyent water ionizers so popular among health and fitness social media celebrities?

We sat down for a glass of chilled alkaline water with a few of our favorite athletes and health and wellness personalities to catch up with them and learn how Tyent water ionizers rock their world!

NFL player-turned-model Keith Carlos has a rare perspective on how important proper hydration is; with a dual career at the very top of a physically challenging sport and modeling that is aesthetically demanding.

It’s no secret that some of your favorite entertainers prefer to drink Tyent Water to any other type.  But what makes them choose to install a Tyent water ionizer rather than other brands?

Just like we did with some of our sports heroes, we asked three of them, and they told us!

Roger Daltrey, Founder and Lead Singer, “The Who”
With a brand new studio album in the offing, Roger Daltrey hasn’t stopped rocking yet, despite a career spanning over 50 years.  One of the secrets of his professional longevity? A Tyent water ionizer!

“I now take a Tyent water purifier [ionizer] on the road with me.” ~ Roger Daltrey

We’re proud of what we do here at Tyent and we love to share with you all of the amazing benefits of drinking Tyent Water!  But what do other people think about it?

Many of our fans come from the high energy, high profile worlds of show business and sports, as well from the medical and health professions.

These people are in the perfect position to tell you just how great Tyent Water is!  After all, who needs a natural energy boost more than a world-class athlete?  Who understands the way that hydrogen water from your ionizer impacts so significantly on your body than a medical …