There’s a problem with Kangen water ionizers, and Enagic – the company behind the products – is seemingly burying its head in the sand.

To give some context, many people buy a water ionizer to remove deadly contaminants from their tap water. Tyent filters remove and reduce a host of toxic elements, including notorious carcinogens such as Chromium-6.

So, what if you bought a Kangen water ionizer, only to later discover that not only does it provide scant information about the contaminants that its filters actually remove, but that a potentially carcinogenic substance is known to exist at the heart of the Kangen water ionizer itself?

It’s hard to comprehend, but true. 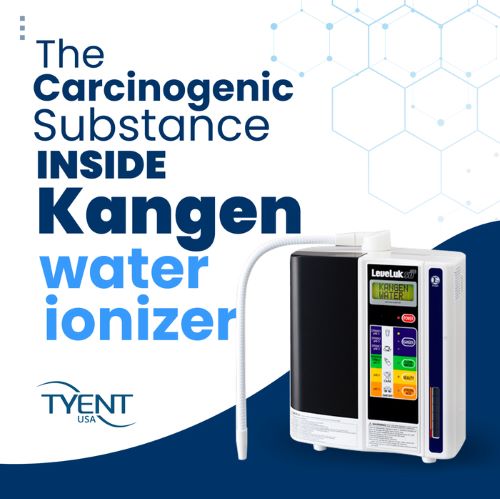 Fancy Some Bleach with Your Water?

Again, some context is needed. Kangen/Enagic has long used ‘Strong Kangen Water’ as a selling point. However, although the size of Kangen plates isn’t a problem as such, the plates are solid – rather than solid/mesh hybrid ones – and there aren’t enough of them. Essentially, Kangen water ionizers lack power and don’t pack the ionization punch needed to produce ‘Strong’ Kangen water.

So, a patch is needed. The patch in this case is the use of an ‘electrolysis enhancer’: sodium hypochlorite. Sound familiar? You might know it better by its household name – bleach. When sodium hypochlorite is subjected to electrolysis, noxious gas is produced that’s unpleasant and potentially toxic.

To its credit, Enagic doesn’t deny this – it’s all right there in the water ionizer literature – but it doesn’t see it as a problem. Enagic’s suggestion to its customers, who obviously don’t want to drink bleach residue on a regular basis, is to flush the water ionizer out after making Strong Kangen Water.

To clarify, both Strong Kangen Water and the regular Kangen drinking water are produced in the same water cell. Kangen customers must flush, flush again, and keep their fingers crossed that all of the hypochlorite residue has been removed.

Why is Kangen Getting This So Wrong?

Enagic is a well-established water ionizer company and has been around for a long time. It’s hard to fathom why it persists in manufacturing under-powered machines that need chemicals to help them function. The water ionizer industry has moved on and Enagic is at risk of looking dated and out of touch with what customers want.

We’re all more aware of the deadly toxins that flow in municipal water around the country, and why water ionizers are the best way of removing them. To sell a water ionizer that requires a potentially harmful chemical in order to function is somehow ironic.

The Future for Enagic?

We must still regard Enagic as a presence in the water ionizer industry and we don’t want to see well-intentioned companies fail.

We want as many people as possible to have access to clean, ionized alkaline water to help support health and wellbeing. There’s room for more than one company committed to producing safe, great quality machines, at a fair price.

But is Enagic pulling out the stops to achieve that right now? We’ll let you decide for yourselves.