With its finger firmly on the pulse, Todd Haynes’ film Dark Waters opened just before Thanksgiving. It lays bare the story of a lawyer representing a cattle farmer from Parkersburg, West Virginia; who believes his land, animals and family are being poisoned by a nearby landfill.

The site in question is operated by corporate giant DuPont, which has been dumping toxic chemicals there for years. There are clear parallels to be drawn with the hugely successful 2000 film, Erin Brockovich and the titular character’s mission to expose the twin evils of corruption and deadly contamination.

Dark Waters is a stark, angry and thought-provoking film. You might leave the cinema with a swelling sense of how justice must be made to prevail and finally… finally…those faceless, dark corporations will be brought to account. However, films – no matter how emotionally powerful – cannot create the sea of change that’s needed.

The Environmental Working Group (EWG) doesn’t throw phrases like ‘national crisis’ around like rice at a wedding. America has a big problem with its water. We can’t solve it overnight, but we can follow the EWG’s advice to protect ourselves from contamination.

Get Your FREE Water Report

The first step to making sure that your family is drinking clean, safe water, is to grab your FREE Water Report. Next, talk to our friendly team of water ionizer experts about installing a water ionizer at home.

Tyent filter technology is the best in the world, filtering water at the same micron level as hospital kidney dialysis machines.

Our groundbreaking Chromium-6 Filter is a 4-stage filtration system that removes:

Peace of Mind With a Water Ionizer

Quit worrying about your drinking water for good by calling up our friendly team of experts at and finding out more about which water ionizer is right for you.

Right now, you can save up to $2000 on our best selling water ionizers AND every water ionizer comes with a Lifetime Guarantee and $1600 of FREE gifts! 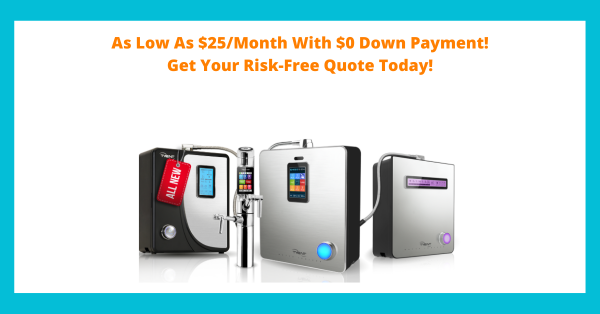