It’s not just us buzzing with excitement over molecular hydrogen – it’s the scientific community as well!

Molecular hydrogen is astounding doctors and research scientists around the globe. Here are a few of the reasons why – and each one of them is backed by science! 1. Your body’s pH balance is crucial to so many aspects of good health. This double-blind, placebo-controlled study showed that water containing dissolved molecular hydrogen had an alkalizing effect inside the body. This is especially beneficial to athletes and very physically active people who might otherwise be at risk of metabolic acidosis.

2. This compelling study indicates that by scavenging hydroxyl radical formation, hydrogen can provide protection against radiation-induced damage to DNA.

3. Oxidative stress – a surfeit of harmful free radicals in the body – is potentially very damaging to health. It is linked to various cancers and accelerates the natural aging process. Molecular hydrogen is shown in this study to be protective against oxidative stress-linked cancerous cells.

4. How molecular hydrogen in Tyent Alkaline Water helps top athletes and sportspeople with their training and performance, is something that we’ve talked about before. Here, the science behind it is made clear: “Adequate hydration with hydrogen-rich water pre-exercise reduced blood lactate levels and improved exercise-induced decline of muscle function.” Tyent Alkaline Water is a staple in the kit bags of countless sports professionals – and this is why!

Benefits of Molecular Hydrogen – Your Muscles

6. In this clinical study, the potency of molecular hydrogen’s therapeutic antioxidant power is seen again. In tests, scientists observed how brain injuries might be suppressed by inhaling hydrogen gas.

7. What about pain? Can molecular hydrogen help to make pain sensations less severe? This study suggests so. Twenty patients suffering from rheumatoid arthritis drank water containing high levels of molecular hydrogen every day for 4 weeks, and then for a further 4 weeks, following a 4-week wash-out period. Scientists concluded that the hydroxyl radical scavenger hydrogen significantly reduced the levels of oxidative stress in the test subjects. It was observed that the patients’ symptoms of rheumatoid arthritis improved to a significant extent as a result of drinking hydrogen water.

8. The scientific study into the effect of molecular hydrogen on chronic liver inflammation indicated that hydrogen seemingly offers ‘significant protective effects’ in the case of damage to the liver.

9. Hydrogen can be neuroprotective in cases of Parkinson’s Disease. This randomized, double-blind, placebo-controlled multi-center trial sought to confirm that results of a previous scientific trial – that drinking hydrogen water for a period of 48 weeks significantly improved symptoms of Parkinson’s Disease. Scientists in the later trial found that: “the intake of H2-water, even after MPTP administration, reduces neurotoxic damage.”

10. The body’s essential organs can be protected by molecular hydrogen, as shown in this important clinical study. The scientists went on to say, in their conclusion, that the findings made, “a case for supporting hydrogen medicine in human disease prevention and therapy.”

11. Cellular homeostasis is the process by which cells maintain stability and keep your body in healthy balance, at a cellular level. It is how cells remain stable in response to outside factors – such as high temperatures. In this study, molecular hydrogen in drinking water was found to help support complex cellular processes, including modulation.

12. In this study, molecular hydrogen was found to improve mitochondrial dysfunction in cases of polymyositis/dermatomyositis (PM/DM), and mitochondrial myopathies, and improve patient outcomes.

Hydrogen Has a Calming Effect on Allergic Reactions

13. Allergic reactions are commonplace, and molecular hydrogen can help, according to this exciting study. In the trial, hydrogen appeared to have a calming effect on allergic reactions. Scientists believe this Is achieved by the effective modulation of cell processes and hydrogen’s positive effect on cellular homeostasis, as already mentioned above.

15. In this clinical study, scientists found more evidence that hydrogen is protective and prevents oxidative stress from causing injurious harm to cells. It supports the body by activating antioxidant pathways and helping to prevent disease.

These compelling studies are just a snapshot of the incredible possibilities. Molecular hydrogen’s therapeutic potential is one of the most exciting medical discoveries of recent times.

And the most remarkable thing? You can enjoy the fantastic benefits of molecular hydrogen in your own home with a Tyent water ionizer.

A Tyent Water Ionizer produces the highest levels of dissolved molecular hydrogen in every glass. You can tell the difference almost immediately – and not just because of the great taste!

Do you want maximum levels of molecular hydrogen in your life? The Tyent H2 Hybrid Ionizer is the first EVER Alkaline Hydrogen Hybrid machine. With up to 1.8+ ppm molecular hydrogen, there is nothing else on the market that compares.

Millions of people have already discovered the astonishing difference that Tyent Alkaline Hydrogen Water can make to your life and well-being. Are you ready to start your own journey with a Tyent Water Ionizer? Call our team of friendly experts today at 855-TYENT-US ()! 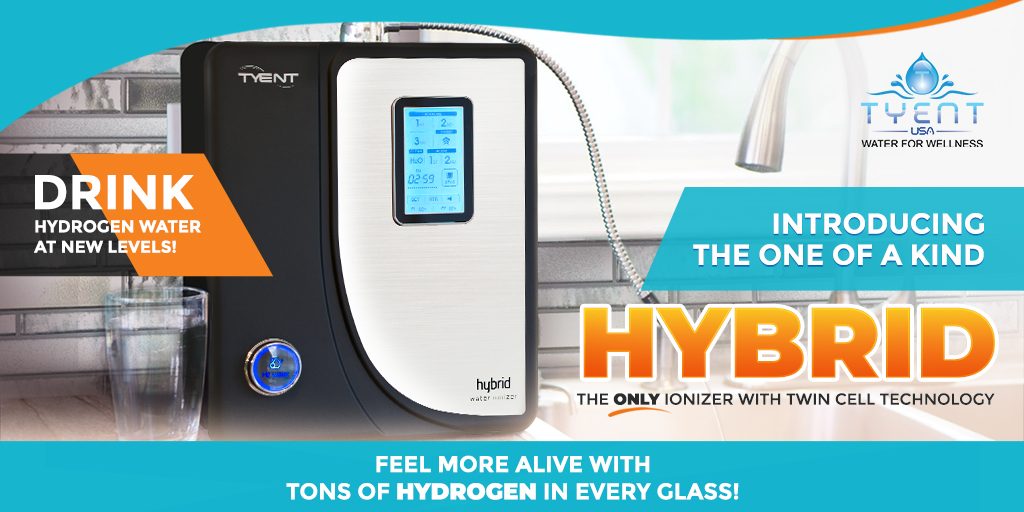