Yesterday I touched on the fact that people truly love their Tyent alkaline water machines.  From the refreshing taste, to its remarkable hydrating properties, and vast reduction of the level of chemicals present in tap water, Tyent Water is the water of choice for many.

However, there are those who remain unconvinced.  That may change after reading today’s heartfelt testimonial; but first, a question.

How is Tyent Ionized Alkaline Water Good for the Skin?

Tyent offers a one-two punch when it comes to keeping skin beautiful. When ingested, Tyent alkaline water can help maintain a healthy complexion due to its ultra-hydrating abilities. When Tyent’s level 4.5 acidic water is applied to the outside of the body, skin can be cleaned without stripping it of moisture or using harsh chemicals.

Many people with skin problems have reported great relief from such skin conditions like Eczema, Psoriasis, or just dry, itchy skin.

The following testimonial is from one of those who suffered and found relief from their condition by drinking ionized alkaline water from Tyent. 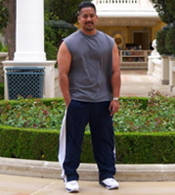 Meet Jon B.  Jon is one of Tyent’s greatest supporters.  Before deciding to purchase his water ionizer from Tyent, Jon did his homework.  He had heard that the many maladies associated with dry skin could be greatly reduced through better hydration.  After extensive research, Jon invested in a Tyent water ionizer.  He couldn’t be happier.

Jon’s case was severe.  So severe in fact, that he couldn’t even don a T-shirt, as it was just too painful against his skin.  Unbelievably, Jon did not leave his house for a full year and remained in excruciating pain.  That was until he installed a Tyent ionized alkaline water machine, then Jon’s life was forever changed.

Jon also had this to say; “After numerous failed attempts by many doctors, I decided to take the holistic route.  My first instinct was to purchase the best water ionizer on the market.”

“After researching many testimonies and videos, the Tyent water ionizer was an easy choice.  I LOVE this machine! Today, I am now living a normal life, in optimal health, and free of any skin disease!”

“I can honestly say that Tyent Alkaline Water not only restored my health, but absolutely saved my life!”

What an incredible testimony and heart soaring story!  When I read endorsements like that, it lifts my spirits. Ready to discover which Tyent water ionizer is right for you? Check out our Water Ionizer Cheat Sheet for everything you need to know before you buy.