Fresh produce is best enjoyed in its natural state, and alkaline water may just be the best kind of water you can use in washing them.

Fresh Produce and Alkaline Water: Is It the Best Pairing?

Why Should You Wash Fresh Produce?

Fruits and vegetables are an important dietary staple and should be on everyone’s plate at every meal time. This means you have to make sure they are clean and safe for consumption.

While we are all too aware of the dangers of food poisoning from meat, we aren’t very vigilant when it comes to fruits and vegetables. But, studies have shown that almost half of all foodborne diseases stem from the germs found on fresh produce.

Some of the dangerous germs you can find on fresh produce include E.coli and Salmonella (both dangerous bacteria found in the intestines of humans and animals, and can contaminate unpasteurized dairy, fresh meats and — unbeknownst to many — fresh produce), and Listeria, a bacteria found in soil, feces, and water that infects all warm-blooded mammals–including humans.

Stay safe by either washing and cooking your food properly.

How Do I Properly Wash Fresh Produce? 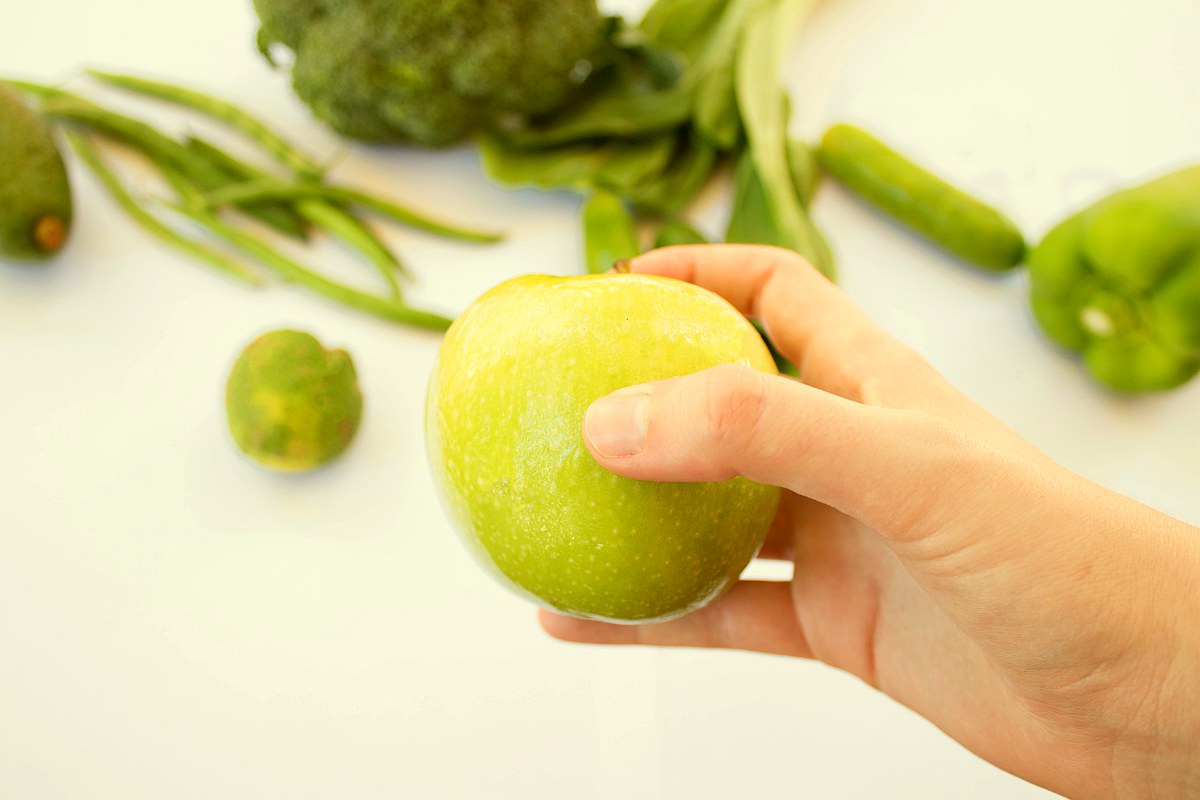 Proper handling and washing will remove bacteria off the surface of fresh produce. Bacteria are often living in the soil clinging to the fresh produce, so making sure all traces of soil is removed is of absolute importance.

Here’s how the FDA recommends you should wash fresh produce:

Washing farm fresh fruits and vegetables are effective at removing not only harmful bacteria, but also pesticides. But, there’s not one universal way of washing for each and every fruit and vegetable.

Washing fruits and vegetables under running water are far more effective than simply dunking them into some water. This is because bacteria will just float around and cling again to the produce when you pick them back out while running water flushes them away and forces them down the drain.

Peeling and scrubbing produce such as potatoes clean them best, while soft fruits like peaches require a gentler approach. Waxy produce requires a more thorough scrubbing, as pesticides leave residue underneath the wax.

Using dish soap, bleach, and other cleaners are also not ideal for washing fruits and vegetables. Produce, unlike dishes, have pores that can absorb and trap soap.

What Is the Best Way to Wash Pesticides off Fresh Produce?

Studies say that rinsing fruits and vegetables with just water and not specific produce cleaners is sufficient enough. But, many point to mixing a bit of salt in water to remove most pesticide residue.

Should I Wash Fresh Produce with Alkaline Water?

Regular tap water is a good medium for cleaning fruits and vegetables, but they don’t clear up all of the residues. Alkaline water is more effective, as it works to remove pesticides, which are acidic, as well as clear away residues of herbicides.

Alkaline water also helps combat whatever acid residues are left on the surface of the produce. 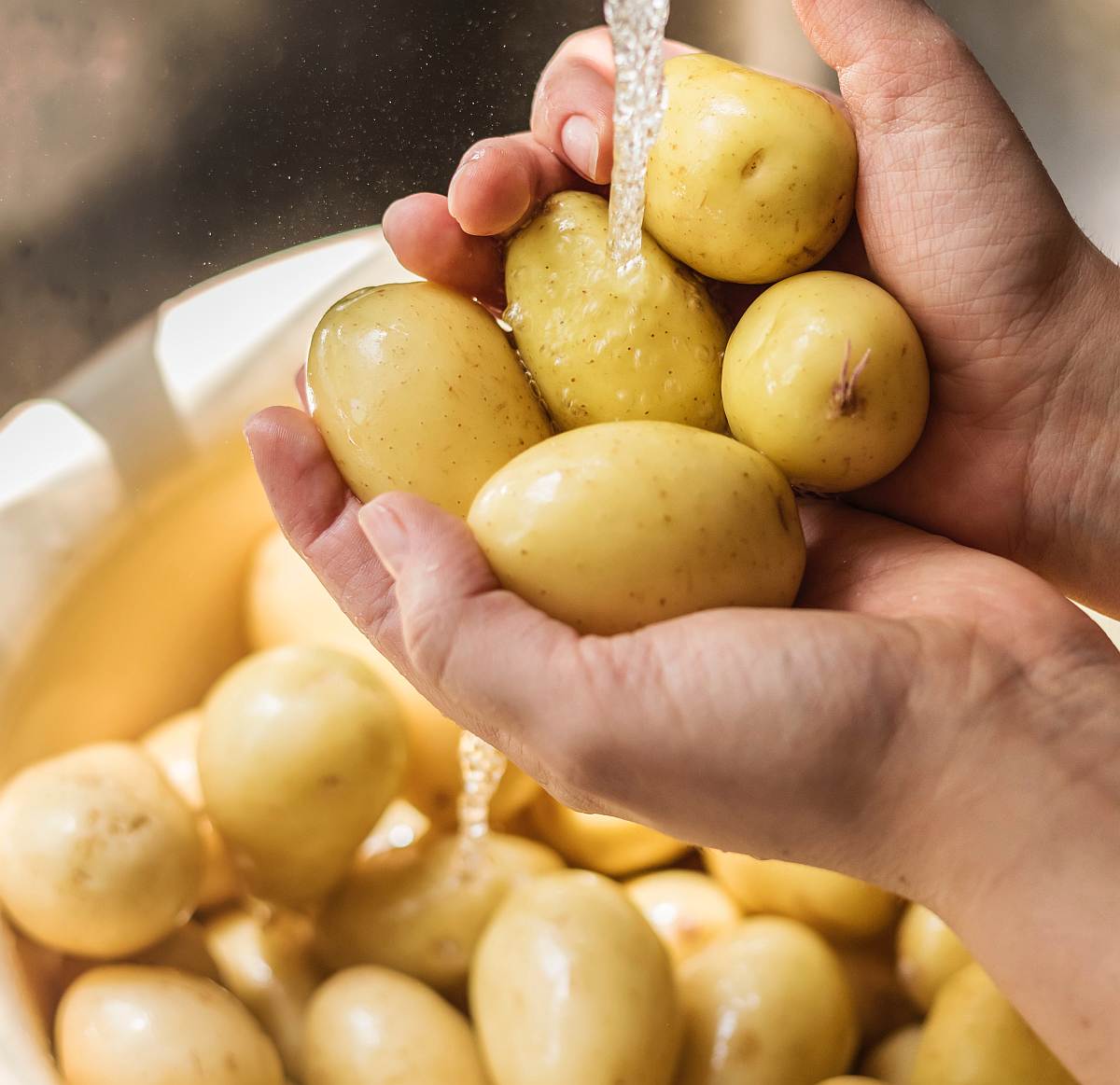 The alkalizing properties of alkaline water work best on produce, as it neutralizes the acidity in many commercially used pesticides. Alkaline hydrolysis occurs when pesticides come in contact with alkaline water, which causes degradation in the pesticides.

What Is Alkaline Hydrolysis? A chemical reaction in which an alkaline material is used to dissolve and dispose of organic matter. In washing produce, alkaline conditions degrade pesticide into their inactive, and non-toxic forms.

RELATED: 18 Fruits And Veggies That Can Keep You Hydrated

How Do I Prepare Alkaline Water for Washing Fresh Produce?

Besides effectively cleaning farm fresh produce, alkaline water has a host of other great benefits that make having it around the house useful. For washing fresh produce, there are a number of known ways.

Note: Those on a low-sodium diet should not add baking soda to their water due to its high sodium content.

Another way to manually alkalize your water is to add lemons in it. Lemons, known for being anionic, triggers your body into making the water you drink alkaline during the digestion process.

What Is Anionic? Relates to an anion, which is a negatively charged ion. Lemons are a known anionic food, which means their negative ions are higher in number than positive ions, which aids the work of digestive chemicals.

When preparing alkalized water using lemons, remember not to squeeze the juice in. Simply place the pieces of sliced lemons in a pitcher of water and let stand overnight in room temperature.

You can also prepare alkalized water by simply putting pH drops in them. pH drops contain concentrated alkaline minerals and can be bought in many health stores.

What Is the Easiest Way to Prepare Alkaline Water for Fresh Produce?

The easiest way to have continued access to alkaline water is to have your own water filtration system or water ionizer. Water ionizers, for example, are easily attached to faucets to ionize water, separating alkalized water from acidic water.

A single water ionizer can produce 70% alkalized water perfect for drinking, washing fresh produce, and more. But, don’t discard the leftover acidic water as it can also kill many types of bacteria that can be found primarily on human skin.

It’s pretty much known to everyone that any fruit or vegetable should be properly washed before consumption. The risk of food poisoning is a serious consequence no one can risk.

No need to worry about which special produce washer you need to buy to get the best results. Washing your fresh produce with alkalized water helps with dealing with pesky pesticide residue. The Tyent Turbo alkaline water setting works best because it emulsifies oil-based herbicides and pesticides without any added chemicals and ensures that they are fully removed.

What do you usually wash your farm fresh fruits and vegetables with? Share them with us in the comments section below!

Up Next: 101 Reasons To Love Tyent Water Ionizers: Health Benefits And More 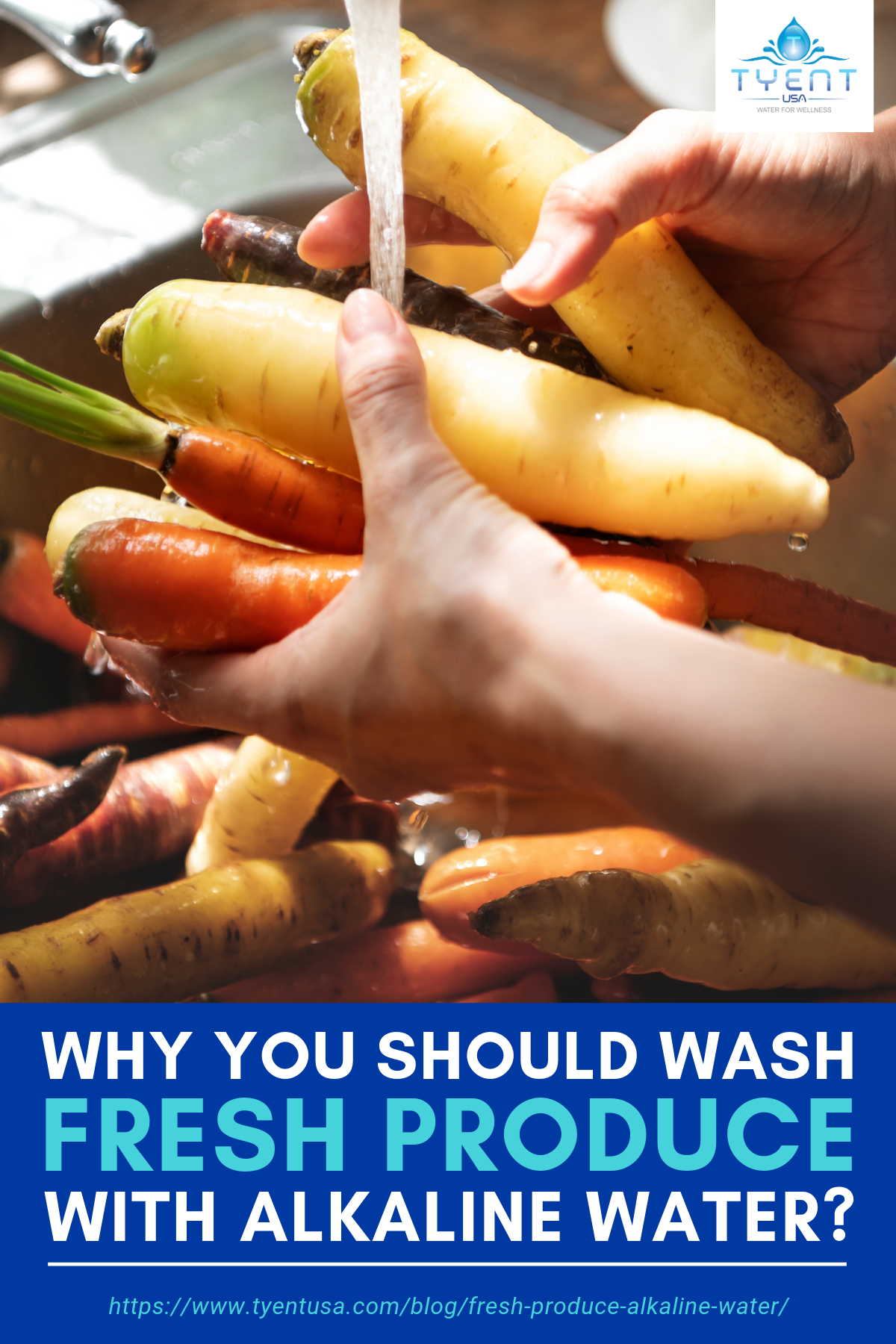 10 thoughts on “Why Should You Wash Fresh Produce With Alkaline Water?”